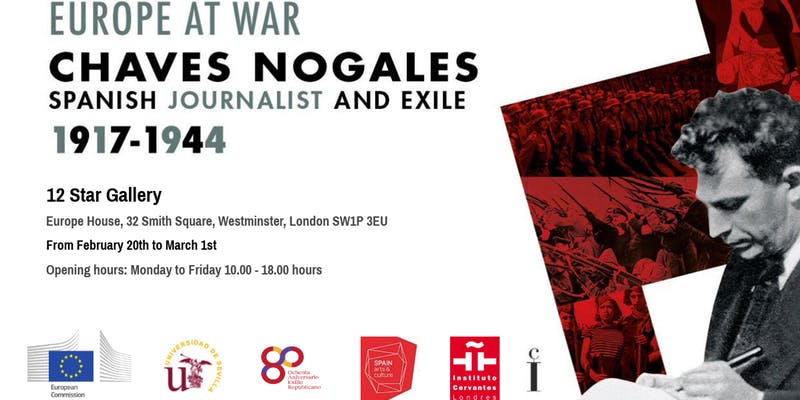 If you are interested in history and journalism you definitely will not want to miss the new exhibition Europe at War (1917-1944) – Manuel Chaves Nogales at 12 Star Gallery in Europe House. On show between the 20th of February and the 1st of March, this exhibition honours the work of Manuel Chaves Nogales, a Spanish journalist who lived between 1897 and 1944.

Born in Seville, Chaves Nogales was present at the great events that convulsed Europe in the first part of the 20th century. He was the editor of a Madrid based newspaper and understood very early on that whoever was going to be the winner of the Civil War, freedom was going to be lost in Spain’s future. Loyal to the Spanish Republic but discouraged by this realization he went into exile, first in France and later in England, considered by then as the last beacon of liberty in Europe. Chaves Nogales carried with him his resolution to create awareness of the continent’s struggle by opening a news agency in Fleet Street. He died in London just weeks before the allied landing in Normandy and to this day is still buried in an unmarked grave.

This exhibition, organised by Christian Ravina, the University of Seville, the Instituto Cervantes and the Embassy of Spain in the UK, is part of a joint effort to pay homage to the memory of Spanish exiles in Britain.

It seeks to highlight Chaves Nogales’ lucidity and commitment to the cause of liberty, both in the wake of the Soviet revolution and against the growth and advance of fascism. It is also a testimony to his passion for the search of truth in challenging times.

We strongly recommend this event since it is a lovely opportunity to learn about the history of Spain and Europe. Please do let us know what you thought if you get the chance the go!

"A fantastic learning experience – the teachers really make the effort to provide fun and stimulating lessons. I wouldn’t hesitate to recommend Vamos as a place to learn Spanish…"
Emily Bennett