Did you go to the Flamenco festival? Or maybe Rosalía’s concert? Or perhaps you had the chance to listen to some of Rosalía’s songs?

If you visited any of the events that Julia and I posted about recently, this blog is for you. And if you couldn’t make it to any of them and you are wondering when the next Hispanic festival is taking place, do not worry, there is one coming up! All you have to do is read this blog to find out more.

The next Hispanic festival coming to London is called La Clave Fest, and I believe its slogan says it all: The day that London goes Latin.  The festival will take place on the 3rd of August from 1pm till 9pm, so you will have lots of time to enjoy the great food, dance and performances. 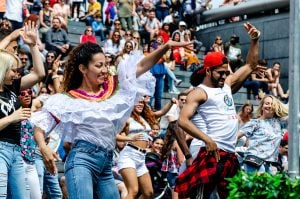 Two years ago, I remember writing about a small Latin festival in Crouch End. Last year, the “small festival” became a big festival held in London Bridge; and this year the festival is back, bigger and better, in Finsbury Park – which I believe shows how much Latin culture is growing in London.

The festival is organised by LatinoLife , the UK’s leading Latin media and events. They organise Latin events around the year, the most important being The LUKAS Awards, Europe’s only Latin entertainment awards ceremony. What makes La Clave Fest special is that it promotes new talents based in the UK or living in other countries, giving them the opportunity to perform on the 3rd of August.

In order to promote Hispanic culture, in the 6 weeks leading up to the day of the festival, LatinoLife is taking artists and exceptional people into schools to inspire young people with their stories and to impart their knowledge, skills and passion about their culture and heritage. This culminates in a day of fantastic music and dance in Finsbury Park.

I remember going there two years ago and having lots of fun, so if you have the chance, do not miss it!

Watch the video below to have a better idea of what to expect from La Clave Fest: