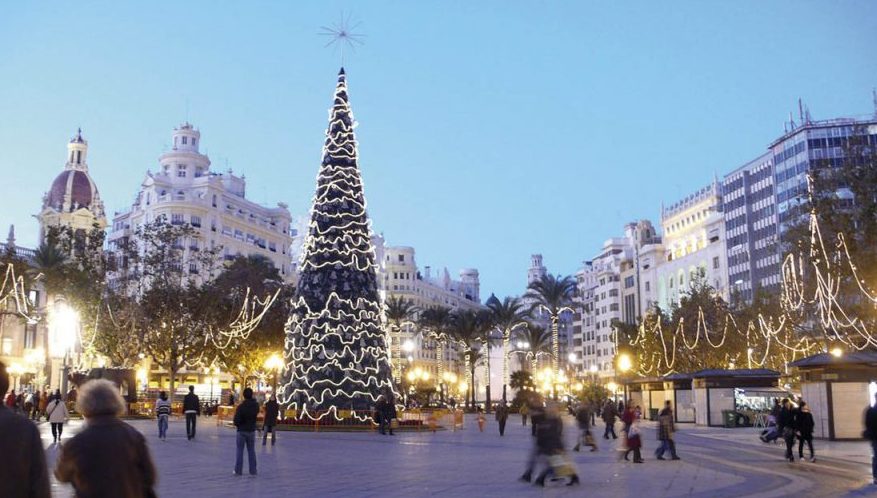 How is Christmas celebrated in Spain?

It’s that magical time of year again when the streets are filled with lights, decorations and people shopping for gifts. It’s that time of year when children’s eyes shine with enthusiasm and we all become a little bit more cheerful, more solidary. Christmas is a time in which we all seek to enjoy with our loved ones, reunite with family and old friends, and share family traditions.
Christmas is celebrated a little differently in every place around the world. For Spanish people, Christmas means Christmas lottery, Christmas carols, turrón and polvorones, eating grapes with each bell strike of the clock in Puerta del Sol, Reyes Magos and roscón. The truth is that we have many traditions, and some of them are quite curious. Let’s review a few of the most special Spanish Christmas traditions. 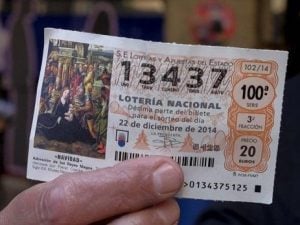 In Spain, Christmas is celebrated between December 24 and January 6. However, all Spaniards know that the holidays have arrived on December 22, the day on which the Christmas Lottery (Lotería de Navidad) is celebrated. 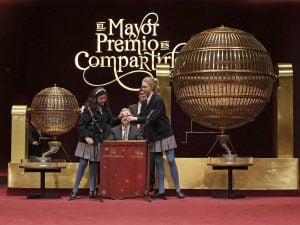 The Christmas raffle has been celebrated since 1812 and is the most popular lottery raffle in Spain. The first prize, known as El Gordo (“The Fat One”), has a total value of four million euros.

Sharing a Christmas Lottery number is a tradition in Spain. Tickets are known as tenths (décimos), since they are worth one-tenth of the total value of the ticket, and it is common to share a tenth with family members, friends or colleagues.

Moreover, seeing the advert for the Christmas Lottery has also become a tradition, and every year the Spaniards look forward to the new ad.

This is the advert this year, let me know you think! 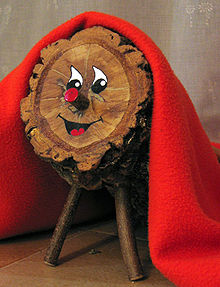 The Tió de Nadal is a very special Christmas tradition that is celebrated in the region of Catalonia. In Catalan, tió means log, and Nadal means Christmas, so the English translation would be Christmas Log.

The tradition consists of taking a log in which a smiley face is normally drawn, covering it with a blanket so that it stays warm, and “feeding” it every night during the month of December.

On Christmas Eve, kids (and some adults too) beat the Christmas Log with sticks while they sing a song so that Tió de Nadal shits presents under the blanket.

I recently saw a very funny video in which the American actor Viggo Mortensen explains this weird Catalan tradition really well. Check it out! 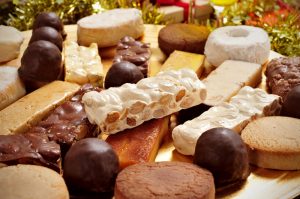 As you probably know already, we Spaniards love to eat, so I don’t think that you’ll be surprised to hear that, in Spain, Christmas sweets are an essential element of Christmas celebrations. In fact, I recently read an article explaining that, only in the Community of Madrid, more than a million sweets will be consumed this Christmas!

During the Christmas season, we mainly eat turrón (tablets made with honey or sugar and lots of almonds) and polvorones (small cakes made of flour, butter and sugar, with additional ingredients such as cinnamon, almonds…).

They are delicious, so I encourage you to try them if you have the opportunity. In London, you can find them in the Spanish store R. Garcia and Sons, located on Portobello Road. 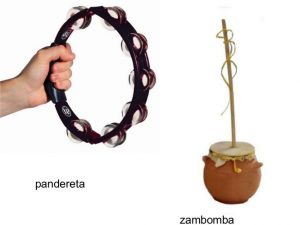 After dinner on Christmas Eve (Nochebuena), it is typical to sing Christmas carols with the whole family while playing the pandereta and the zambomba.

Here’s one of my favourite Christmas carols with lyrics so that you can sing along at home! 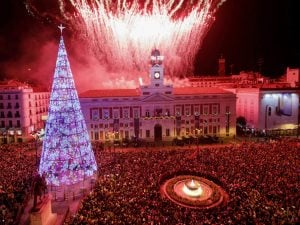 If you have been lucky enough to celebrate the end of the year in Spain, you will be familiar with the tradition of eating 12 grapes at midnight on New Year’s Eve.

The tradition consists of eating 12 grapes to celebrate the beginning of the new year, one for each stroke of midnight of the clock in the Puerta del Sol square in Madrid.

Some believe that the 12 grapes are equivalent to 12 months of the year, while others are convinced that for each grape you will be granted a wish. I don’t know if either is true, but it certainly is very funny to see family and friends trying to eat 12 grapes in a few seconds. 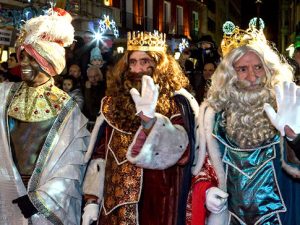 The tradition says that the Three Kings (los Tres Reyes Magos) were in charge of going to Bethlehem to see baby Jesus after his birth.

Melchior, Gaspar and Baltasar travelled by camel from the East guided by a star and, upon arrival, presented three offerings to Jesus of Nazareth: gold, incense and myrrh.

On the afternoon of the 5th of January, the so-called Kings’ Cavalcade (Cabalgata de Reyes) is celebrated, during which the Three Kings parade in large floats accompanied by musicians and people wearing costumes. 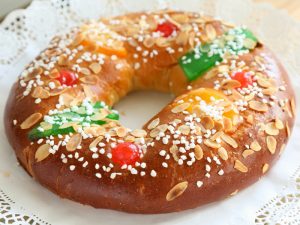 Then, families return to their homes and children go to bed early so that the Three Kings can bring them presents during the night.

The next day, everyone gets up early to open all the gifts, and it is typical to eat the traditional Roscón de Reyes, a sweet, round cake that is usually decorated with candied fruit.

The holidays end on January 7, and everything starts going back to normal… until the following year. 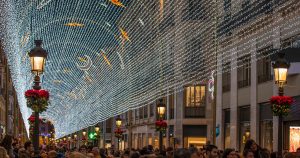 Did you know? You can also read this blog post in Spanish! Click here for the Spanish version.