Misunderstood expression – No hay moros en la costa (a way out of danger).

The Spanish Word ‘moro’ comes from the latin maurus which referred to the inhabitants of the old kingdom of Mauritania and the antique Roman provinces of Tingitana Mauritania and Cesarian Mauritania.

During the 8th century invasion of the Iberian Peninsula, the Morish were part of the force that conquered Spain in just 9 years.

Over the next several centuries the east of Spain was frequently invaded by Berber pirates from northeast Africa.

Costal towns were frequently attacked and that was the reason watchmen towers were created.

These towers were built without windows and could only be climbed with rope ladders.

From the top of the towers the horizon could be seen and as soon as a ship appeared the sentinel would shout: 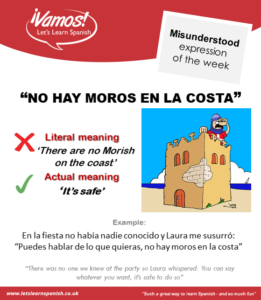 A bell sounded, bonfires lit and people were alerted to get ready for an attack.

The system remained until peace was made with the enemy and so did the expression in order to warn about danger.

After times the expression changed to ‘no hay moros en la costa’ to say there is no danger.

Some villages in Spain take their name from this ‘defense arquitecture’ such as towns like Torre del Mar, Alahurín de la Torre, Torre del Negro along the Mediterranean coast.

If you want to visit the place where the pirates used to stop you can visit La Manga del Mar Menor, a famous touristic coast place.